The war rains down on the Yazidis 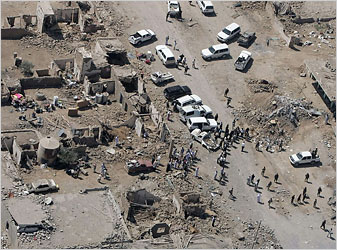 Aerial view of one of the Yazidi villages devastated by Tuesdays bombing.
Four suicide bombers driving fuel tankers struck the normally restive Yazidi towns of Qataniyah and Jazeera in Sinjar Province of northwest Iraq on Tuesday, in what has proven to be the most devastating attacks of the entire war. The bombings targeted the Yazidi minority religious sect. The poorly understood Yazidi faith embraces elements of Zoroastrianism, and incorporates Islamic teachings as well as rituals that are rooted in ancient Aryan Vedic ceremonies. The Yazidi Kurds are caught between the Sunni extremists who want to drive them from their homes because they want their land; and the regional Kurdish officials who want their votes.

All the while, the Yazidi just want to be left alone, unmolested. To that end, they have for the most part removed themselves from the mainstream of Iraqi society, occupying a backwater in the northern mountains, and until Tuesday, they were probably the group least affected by the civil war raging in Iraq. Until last spring, when a young Yazidi girl was stoned to death after falling in love with a Muslim boy and converting to Islam, few people outside the Middle East had even heard of the obscure religion with only a half-million followers world wide.

That all changed Tuesday. The death toll has passed 250, is expected to climb as high as 500, as bodies are still being pulled from the rubble and debris of the demolished villages.

"Someone in every family is dead." said a survivor of the attacks, "They destroyed us." He had lost several relatives in the bomb attacks, while a neighbors entire 12-member family was wiped out.

As rescuers arrived at the scenes of the bombings with bulldozers to clear the rubble, surviving relatives gestured to piles of rubble where their relatives were trapped, many with extremities protruding. The August heat and unrecovered dead and decomposing bodies represent a secondary danger in the form of disease.

Hospitals in the area were overwhelmed. The hospital in Dahuk had critically injured patients lying on floors, because all of the beds were full. Morgues were overflowing, to the point that victims, many missing arms and legs, were stacked like cordwood outside on the ground.

No group had claimed responsibility as of Thursday, although the American press and administration and military spokesmen invoked the specter of the reliable, default-position bogey-man, al Qa'eda.

Tuesdays attacks appear to be part of a larger pattern of stepped-up violence in areas that have a minimal military presence. Such attacks cast a pall over the claims of major successes in reducing violence in areas of Baghdad and in Anbar province.

When the escalation of American forces was proposed, it was supposed to reduce the violence in the capitol so the political process could have a chance to take hold. Instead, the government of Nuri Kemal al-Maliki teeters on the brink of collapse; and since the escalation got underway, four massive bomb attacks (attacks that kill more than 100 people) have taken place, Sunni Sheiks who had allied with the Coalition forces in al Anbar province have been assassinated, and the number of civilians killed in mass-casualty bombings was triple in July what it had been in June. The largest increases in civilian casualties were in the north, in areas where there is little or no military presence.
Posted by Blue Girl, Red State at 8/17/2007 01:50:00 AM