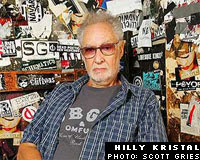 Iconic club owner Hilly Kristal of CBGB fame
If you are "of a certain age" then Hilly Kristal influenced your life, whether you realize it or not.
He opened CBGB in 1973, intending to book Country, Blue Grass, and Blues acts (CBGB - get it?) but punk was emerging and Kristal and the new genre found one another and it was a beautiful match. Because of him, we know the Ramones, Blondie, Iggy Pop, Elvis Costello, the Runaways, Sonic Youth...They all came up through the club scene and CBGB was the club to play.


After years of drama with the landlord, the legendary club closed on October 15, 2006. Hilly lovingly packed up the bar, piece by piece, intent on reopening the club in Vegas. He never got the chance. He passed away today at his home in Manhattan, following a battle with lung cancer. He was 75 years old.


If you are my age, it is acceptable behavior today to take downers and drink until you pass out. Hell, it is expected. And Hilly, if there is a rock & roll heaven, do look up John Peel, enjoy a pint reminiscing with him, and tell him the 40-somethings say "Thanks" - to both of you.