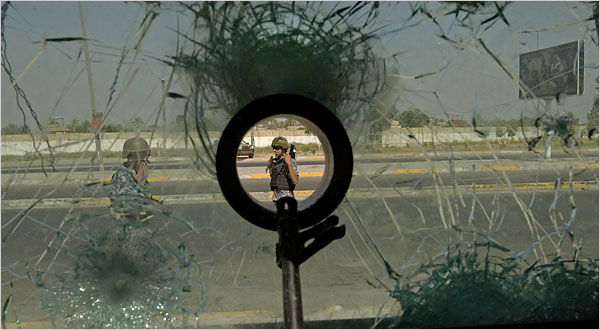 The independent commission established by Congress last May for the express purpose of assessing the capabilities of the Iraq securityforces, has arrived at some sobering conclusions. The commission, headed up by retired Marine Corps General James L. Jones, former commander of EUCOM, has concluded that the unchecked sectarian infiltration that has been part and parcel of the current police forces in Iraq since the units started forming is too great to be overcome. Instead, the entire system needs to be scrapped, and a new state police force started over from scratch.

The report, to be delivered to congress next week, is one more in a long list of offsets that will be obstacles to overcome for Petraeus and Crocker when they come to the Hill week after next. The Jones commission assessments are likely to get a great deal of attention because the 14 member team, made up of former or retired military officers, Defense Department officials and law enforcement officers, is highly respected oveall. In addition, the commission is narrowly focused, concentrating solely on the worthiness of the Iraqi security forces.

This critical indictment of the security forces is another body blow to the leadership of Nuri Kamal al-Maliki and will likely be seized on by congressional opponents of the Bush escalation strategy, offering it as proof that a fundamental shift in American policy is required.

And Americans are once more on the horns of a dilemma. Disbanding the current security forces could carry the same risk of armed backlash that followed the decision of Paul Bremmer to disband the Iraqi military after the invasion of 2003. An administration official confirmed that the recommendations were being evaluated as part of a strategic review.

A spokesman for Defense Secretary Robert M. Gates, Geoff Morrell, said that an American effort to retrain the Iraqi police was in process. He went on to say that Pentagon officials believed that the effort to cleanse the security forces of sectarian operatives without scrapping the whole shebang. “We’re not giving up on the Iraqi National Police,” Mr. Morrell insisted, adding that the United States and Mr. Maliki’s government were “both committed to seeing it through.”

The national police earlier this year were charged with playing a major role in providing security in neighborhoods after the areas were cleared of insurgents by Iraqi and American military forces.

The police have proven that they are not up to the task.

Instead of security, sectarianism runs amok. Problems with supplies and equipment have underlied frequent complaints by U.S. military units that the national police are ineffective at best, and frequently in open alliance with dhi'ite militias that operate in many neighborhoods.

From the New York Times:

American commanders on the ground in Shiite-controlled areas of Baghdad say that the local police actively subvert efforts to loosen the grip of militias, and in some cases, attack Americans directly. One commander in northwest Baghdad said most bomb attacks against American patrols in the area this spring occurred close to police checkpoints.

Officers involved in training the national police units, which fall under the Shiite-dominated Interior Ministry, acknowledged deep problems with the police but said that they had been working methodically for months on retraining national police units to do exactly what the Jones commission is proposing — purge them of Shiite militants and install better leaders.

Officers in Iraq said in that 9 police brigade commanders and 17 battalion commanders had been relieved of duty during the course of the training effort for various acts of misconduct, in particular illegal actions of a sectarian nature as well as corruption.

Of course, attempts to redeem the hopelessly sectarian Iraqi police forces are nothing new. In fact, 2006 was dubbed "The Year of the Police" by the U.S. State Department as part of a *branding effort* that was aimed at obviating the sectarian problems that were, even then, deeply entrenched.

Some Pentagon officials have been forthright in why they are willing to discuss details of the leaked report: They hope that publicly disclosing some of the aspects of the report before it is released will defuse the impact of the findings and redirect attention to the Petraeus-Crocker-White House report due the following week.
Posted by Blue Girl, Red State at 8/31/2007 12:29:00 AM