Another Blackhawk Down, Fourteen Dead 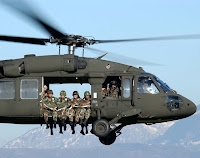 A Blackhawk UH-60 (pictured) helicopter crashed in Northern Iraq on Wednesday, killing all four crew members and ten passengers on board. The cause of the crash is under investigation, but there is no indication thus far that hostile fire was involved. The helicopter was one of two conducting night operations, transporting members of Task Force Lightning, in charge of Mosul, Kirkuk and Sammara, to another operating position. The military in Iraq often travels by helicopter to avoid threats from roadside bombs.

Todays crash was the 63rd helicopter to go down in Iraq, and 36 have been struck by enemy fire. In the first two months of this year, seven helicopters were shot down, killing 28 people. That spate of fatalities led to a reevaluation of flight plans and the implementation of new tactics the prevent anti-aircraft fire.

The crash on Wednesday was the most lethal in two and a half years. In January 2005 a CH-53E Super Stallion went down, killing all 31 on board.