Too Little, Too Late

You know, two years ago, when I wrote this:

There is a topic I have been raging about intermitently for a while now. You know, just because I'm liberal does not mean I don't support the troops...I do. I'm actually willing to pay more taxes so they can have armor and healthcare and pay-raises. More than I can say for the chicken-hawks. Then I opened this mornings New York Times, and there it was on the front page. Vindication! Little did I know that actually reading the article would make me even more angry than I already was.

What I have been screaming about is the fact that we are going to war in jeeps - small j. Humvee's are utility vehicles. They are not battle vehicles. They were designed for use in the cold war, not for combat. They have a flat bottom that absorbs impact, rather than deflects. Combat vehicles have an angled chassis to deflect impact. Utility vehicles are made to scramble across terrain quickly. When they are armored, they lose their ability to be quick and nimble. And the chassis is light, so when they are armored, they out of necessity leave the rear more exposed. (Where are gas tanks located again?) But don't just take my word for it. Let me quote former Army secretary Les Brownlee for you on this subject: "We never intended to up-armor all of the Humvees. The Humvee is a carrier and derives it's advantage from having cross-country mobility, and when you load it down with armor plating, you lose that."

Well this morning, the top-of-the page headline of the "paper of record" read "Safer Vehicles for Soldiers: A Tale of Delays and Glitches." Michael Moss does one of the finest pieces of reporting that I have read lately. I encourage everyone to read the whole thing, but that isn't going to stop me from telling you what's in it - and going ballistic anyway.

The first time I raised questions about this issue was when 18 soldiers got pinned down and killed in Mogadishu. I have not forgotten and have asked the question repeatedly. But I have been screaming at the top of my lungs about this issue since Rumsfeld got asked "the question" by that part-time soldier from Tennessee, you remember, he was basically told that he was expendable by the Secretary of Defense. You remember his glib dismissal: "You go to war with the Army you have." Let it be noted that when Rumsfeld visits Iraq, he does not ride in a Humvee, not outside the green zone anyway, no, he rides in an Israeli-manufactured and Halliburton-owned Rhino Runner. The Rhino Runner, coincidentally is what they transport Saddam in when he makes court appearances. Why is the safety of the guy we were duped into going to war against more important than our kids? If he got blown up, he couldn't tell any of the secrets he knows that have a lot of Washington nut-sacks shrivelling.

Let me start by telling you the surreal way an armored Humvee eventually finds it's way to Iraq. It starts in a plant owned by AM General, headquartered in South Bend, Indiana. They are manufactured eight miles away in Mishawa, Indiana. AM general is pretty good at assembling Hummers, and they come together pretty fast. Without any armor. Then they get trucked four and a half hours to a small shop in Fairfield, Ohio owned by O'Gara-Hess& Eisenhardt, where they are partially disassembled so the armoring can be added.

O'Gara is fighting tooth and nail to keep their exclusive contract - again at the cost of our children's lives - even though they are too small to do the job alone. They have profits to consider damnit! If I question their right to make money then I must not be patriotic!

In January of 2005, the DoD tried to buy the legal rights to the armor design in an effort to step up delivery of armored humvees. O'Gara declined, saying that the efforts of the DoD amounted to a threat to it's "current and future competitive position." I screamed out loud when I read this! Their profits are more important than my nephew who is in uniform even as I type? Um, not to me, and not to my husband, and not to my sister- and brother-in-law. Ruthless bastards. This is your business friendly Rethuglican administration folks. They don't just want you votes, they want your flesh and blood too. Literally. I don't know about you, but I'm contacting my senators and my congressman Monday morning. O'Gara's greed is inexcusable. It's evil. It's (unfortunately not) un-American!

Let's just accept that the administration knew, possibly before the 2000 election, that if George W. Bush won the election, they were going to war. They certainly knew that we were going to war after 9/11 happened. But in 2002, the administration cut the M1117 A.S.V. fighting vehicle from the budget, despite that fact that it had the support of both senators from Louisiana, where it is manufactured. Whereas an armored Humvee can withstand 7.62 mm ammunition fire, the M1117 can stand up to .50 caliber armor-piercing ammunition. The Humvee and the M1117 are both built to take 155-mm artillery airbursts. 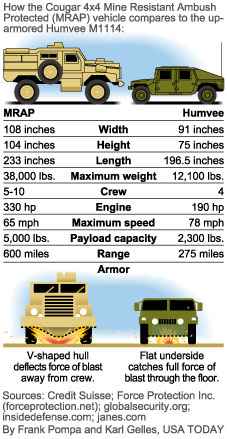 The big difference comes in the back axle. While the armored Hummer is improvised, an afterthought even, with a chassis too light to handle full armor, the M1117 does not have this front-back disparity. The back end of a Hummer is vulnerable to a 4-pound land-mine. The M1117, built for combat, can withstand a 12-pound blast to any wheel. This is the smallest, lightest, quickest fighting vehicle in our armament. Why it was more important to give tax-cuts to a few than to build these vehicles for our troops, who we had already committed to battle in Afghanistan by that point eludes my comprehension.

Preferable to the M1117, however is the Cougar H.E.V. It has a V-shaped chassis to deflect blasts, and can really take a punch. The axles can take the blast of a 30-pound land mine and protect the passengers.

But the mayor of trucktown, so to speak, is the Rhino Runner, manufactured in Israel by Labock Technologies. This rolling fortress of steel can withstand unspecified overhead airbursts and explosives devices up to 1,000 pounds. A Rhino Runner came up against a bomb on the Baghdad Airport Road that left a six-foot crater, and the occupants walked away unscathed. Now that is testimony! The picture of Rummy kicked back and holding court on page 8-A of the Times this morning looks like the Rhino Runner offers a pretty comfy ride, too. And also represents the best value. While a Hummer "fully" armored costs about $140,000 and the M1117 costs $700,000; the Rhino Runner costs a mere $250,000. I'm willing to pay taxes to put the troops in them, if they are determined to "slog it out" over there.

I would have considered this good news. Now, it just pisses me off. Instead of doing at this late stage something that should have been done at the outset if they were going to do this stupid, stupid thing; they should be bringing the troops home.

People, doing this now means they are not just thinking Korea-type occupation, but with overt hostilities and live rounds. They are moving forward, setting up a fifty year occupation of a hostile country. They are planning for your still-unborn grandchildren to be patrolling the same streets that are being patrolled today. The same neighborhoods will be dangerous for Americans for generations to come if these people have their way.
Posted by Blue Girl, Red State at 7/18/2007 06:09:00 PM