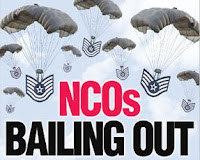 We have been quite diligent at this blog where recruiting and retention issues are concerned, but for the most part, those posts have focused on the Army.

Now the issue is affecting the highly-technical Air Force. All across enlisted career fields, re-enlistment rates are falling precipitously. Especially among young Airmen on whom the service is depending to attend NCO leadership school and become the next generation of senior NCOs. A chasm is emerging in the E-5 through E-7 ranks that will impact the service for decades to come.

Let's look at the numbers: In 2004 the Air Force retained 70% of her enlisted personnel who were eligible for a third hitch. By 2007, that number had fallen to 53%. The percentage of Airmen opting for an initial re-enlistment declined from 63% to 55%.
Warning bells started ringing last spring when the Air Staff realized that retention rates for Airmen with between one and fourteen years in service had fallen for nine consecutive months. The steepest decline was for those with between six and ten years in uniform. The percentage of those personnel opting to remain in service fell from 75% to 65% in less than a year.

Declining retention creates a downward spiral for career fields. While the demands on airmen remain steady or increase, there are fewer experienced NCOs to lead and mentor younger airmen. That, in turn, accelerates airmen into leadership positions for which they lack adequate training and experience and requires veteran NCOs to fill multiple roles. Those pressures, in turn, lead to more NCOs leaving, renewing the cycle.

The Air Force considers 11 Air Force Specialty Codes to be labeled “stressed” because of a combination of retention problems, positions left vacant and operational demands. Altogether, the career fields represent nearly 44,000 airmen, about 17 percent of the enlisted force.

The AFSCs include jobs that have historically been hard to fill because of tough fitness standards and a willingness to be on the front line or sometimes behind it — combat control, tactical air command and control, pararescue and explosive ordnance disposal.

But the other stressed career fields could come as a surprise — contracting, pavement and structural construction, vehicle operations, security forces, and computer and network technicians.

When re-enlistment rates among stressed career fields are examined, the declines are steep.

But concerns aren’t limited to these stressed AFSCs.

The Air Staff looks at the problems with retention and tries to cast them as a possible consequence of the Air Force draw down of forces under Rumsfeld, but while there is blame aplenty to heap on Rummy, the drawdown is a very small part of the problem.

The Air Force has been used to plug holes that should be filled by Soldiers and Marines. Air Force personnel have been dying in Iraq - a conflict that never enjoyed support among the enlisted personnel and junior and mid-grade officers. In other words, the people whose shoulders it would fall upon were smart enough to see what was coming.

Now, they are leaving.

The next president needs to appoint a Secretary of Defense who understands the issues facing all of our branches of service, and who is smart enough to listen and develop strategies to stop the bleeding.
Posted by Blue Girl, Red State at 5/05/2008 11:45:00 AM