Sometimes the Blogerista you know and (either) love (or loathe) as the Blue Girl needs to take a day off and enjoy the hell out of her city and all it's glory.

I am, without reservation, the biggest fan of Midtown/Westport as ever trod the sod of the Eden that is Jackson County, Missouri. That might have something to do with the fact that I never had a hometown until I adopted my husbands childhood zipcode as my own. And I just gotta say this to all you native Kansas Citians - get the fuck over your inferiority complex. Some of us have been lots of places, and land here because it is where we want to be, because this place is the closest to.....well.....Eden as we have seen yet. Saturday at Dave's Stagecoach - a Westport Tradition since 1953. The person you are sitting next to at the bar might be a chronically unemployed drunk, or a respected and well known civil rights attorney - doesn't matter at Dave's, it's the most egalitarian place on earth this side of a trauma bay. Tacos are $.75 and the bartenders are gracious and charming so long as you pay your tab.
I am tempted to, on occasion, blog from the end of the bar, and every week I get closer to making real that threat...

You can't read the brands on the beers in the cooler, but you can get Hamm's, or Harp; Bass, or Bud; or anything in between. The daytime clientele drinks a lot of Old Style and Milwaukee's Beast Best. 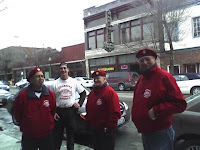 (I pretty much drink coffee with a shot of brandy, milk and artificial sweetener. I bring my own cup so Laurie and Ashley don't have to do dishes on my behalf.)

Check it out! Just as I was telling, for the hundredth time, that when I was a kid back east, my mother said, every time I went out the door alone "Just be careful! And for god's sake, don't get on a train what if there's no red beret on the car," and I looked up, and outside the window there was the Westport contingent of the Guardian Angels, right outside the front door of the Stagecoach! Kewl! I guess we're a real city now, no matter what my Chicago and New York buds say - if ya see these guys, you live in a real god-damned city.

So make the most of it.

There are many, many pluses to city living. Find them, and relish them.

Big Joe Turner was a Kansas City original. That's good enough for me...