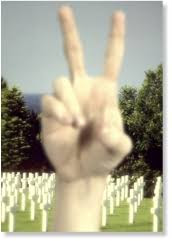 There will be a peace rally on the campus of Penn Valley Community College in Midtown Kansas City on Sunday afternoon from 1:00 to 5:30. Penn Valley is located at Linwood and Southwest Trafficway. If you are concerned about parking - a valid concern if we have a spectacular turnout - PVCC is easily accessible on the busline. Take the Max or the 57 and get off at either Linwood or 31st street and walk a couple of blocks west, or take the 51 and get off between Linwood and 31st and you are right there. The 31st street bus has a Penn Valley stop.

However you get there, get there. Your presence is needed. Your country is in peril and its up to us - that's you and me, Bubba - to take it back. Get out there and bang on pots and pans and raise hell. Turn out, and turn up the volume. Demand this unholy vanity crusade, spawned in hell, based on the lies of feckless minions and sold to a wounded and trusting public, STOP. (You out there Molly? I'm trying to keep your momentum going.)

Four fucking years. Over 3200 dead. American credibility shot to hell all over the world.

The Mission Creep is taking root - 21,500 has become 30,000 and Petraeus is asking for another brigade. Because he has been asked to do the impossible. But another brigade won't help.

George Bush fucked up and he has brought the country to the brink of disaster. He has to be stopped.

Turn out, tune in, and turn it up.

It's time to bring on the politicians because there is no military solution.

It's time to stop the war.

It's time to bring the troops home.

It's time to fully fund the VA.